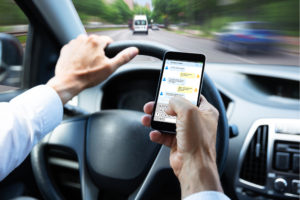 Every day, distracted drivers kill or seriously injure about 1,000 people in the United States. This figure includes drivers, passengers, pedestrians, and everyone else who shares the road. Most people agree that distracted driving is dangerous. However, most people also admit they regularly or occasionally engage in such behaviors.

The issue is fundamental. Many people multitask their way through their days. So, they also believe they can multitask while driving. However, driving already requires multitasking. Drivers must watch their gauges and their surroundings at the same time. Adding any additional task is simply too much.

Due to these risks, many states, including Illinois, have hands-free laws. The Prairie State’s version of this law is one of the broadest ones in the country. It is illegal to use a hand-held cell phone while driving. That includes not only talking or texting but also web surfing, app using, picture-taking, and any other use. There are a couple of exceptions. Drivers can use hand-held phones to report emergency situations or while their vehicles are parked and not impeding traffic.

If drivers violate the hands-free law and cause crashes, the negligence per se doctrine usually applies. Tortfeasors (negligent drivers) are responsible for damages as a matter of law if:

This doctrine still applies even if the tortfeasor “beats” the citation in court or uses pretrial diversion to get out of it. A civil jury determines all the facts in a civil case, including guilt or innocence of a moving violation.

Frequently, Winnebago County jurors see people who violate traffic laws as scofflaws who intentionally put other people at risk. Therefore, compensation is often higher in negligence per se cases. Insurance company lawyers know this to be true, so a negligence per se case’s settlement value might be higher than an ordinary negligence claim.

Of course, the hands-free law is only available in limited circumstances. In fact, Illinois has one of the lowest percentages of hand-held cell phone use in the United States, mostly because of the broad hands-free law.

However, distracted driving is not limited to hand-held phones. It is legal for drivers older than 19 to use hands-free cell phones in Illinois. There is evidence these gadgets are more dangerous than their hand-held counterparts. Hands-free phones are visually and cognitively distracting. Furthermore, these devices often give drivers a false sense of security, meaning they take more chances than they should.

Pet distraction is a problem as well. Most pet owners say they allow their pets to travel with them, and in many cases, these pets are unrestrained. If a restless pet distracts a driver, that driver could be legally responsible for damages.

These cases are quite complex. Illinois also has an overly broad strict liability animal attack law, which could apply to such crashes, in some cases.

Connect with an Experienced Attorney