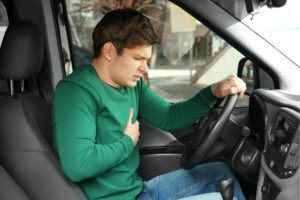 Mild or moderate cold, flu, allergy and other symptoms do not keep very many people at home. Perhaps they have no sick time, or perhaps they simply do not want to miss work. Most people do not think it is dangerous to drive while sick. But the statistics suggest otherwise. According to one study, mild or moderate illness symptoms decrease driving skills by as much as 50 percent.

Overall, sick drivers have slower reaction times and impaired judgement. That’s basically the same effect as other kinds of driving impairment, like alcohol intoxication or fatigue. Specifically, watery eyes and runny noses impair vision while aches or pains make it difficult to focus on driving.

Infections and stomach bugs often have the same effect. Unpredictable pain waves, along with sudden urges to go to the bathroom, are not conducive to good driving.

Negligence and Driving While Sick

Most noncommercial drivers have a duty of reasonable care. They must drive defensively, focus on driving and avoid accidents if possible. If the illness symptoms are severe enough to impair these tasks, the driver might be legally responsible for car crash damages.

Not every sneeze, sniffle, or cough is a breach of the duty of reasonable care. Evidence on this point includes:

In civil court, the burden of proof is only a preponderance of the evidence (more likely than not). So, a little evidence goes a long way. Nevertheless, diligent evidence collection is critical. Usually, there is a relationship between the amount of evidence the victim/plaintiff presents and the amount of compensation the jury awards.

Many people think drug impairment is limited to street drugs, like marijuana and cocaine, or prescription pain pills, like Vicodin or Fentanyl. But Illinois law is much broader on this point.

Frequently, the impairing effects of cold medicines last quite some time. A NyQuil hangover often lasts at least twelve (12) hours.

Sick drivers could be legally responsible for car crash damages. For a free consultation with an experienced Rockford personal injury lawyer, contact Fisk & Monteleone, Ltd. You have a limited amount of time to act.