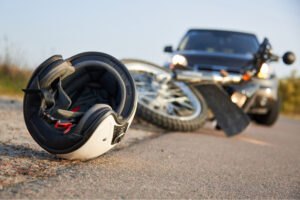 The vast majority of fatal motorcycle crashes happen between May and September. During other times of the year, especially in northern states like Illinois, it’s simply too cold to ride. One would think that motorists would be more aware of the increased number of motorcyclists during warmer months. Alas, that’s usually not the case. Drivers rarely alter their bad driving habits in this area.

Since motorcycle riders do not have seat belts or airbags to protect them, they usually sustain serious injuries in vehicle collisions. So, a Rockford motorcycle accident lawyer can usually obtain substantial compensation for these victims. This compensation usually includes money for economic losses, such as medical bills, and noneconomic losses, such as pain and suffering.

Failure to maintain a proper lookout causes many of the motorcycle accidents in Illinois. Since there are many more four-wheel vehicles than two-wheel vehicles on the road, many drivers have trained themselves to only watch for cars. They largely ignore motorcycles.

This habit is especially prevalent in the Prairie State. Many Illini drive pickup trucks, SUVs, and other large vehicles which are not easy to see around. Rather than try harder to see, which is what the law requires, many motorists simply give up.

Some riders behave in certain ways to increase their visibility among other drivers. These tricks include:

There is no scientific evidence that shortcuts like these make a difference. In fact, many of them might simply antagonize motorists who don’t particularly like motorcyclists in the first place.

Failure to look is a violation of Illinois traffic laws. Therefore, the negligence per se doctrine could apply in these wrecks. Tortfeasors (negligent drivers) could be liable for damages as a matter of law if:

However, emergency responders often do not issue citations in these situations. So, most summertime “failure to look” motorcycle crashes involve the ordinary negligence doctrine.

Negligence is usually a lack of reasonable care. Commercial operators, like Uber drivers, have a higher duty of care in Illinois. If a lack of care causes a crash, the driver could be liable for damages. Evidence on this point includes:

Victim/plaintiffs must establish negligence by a preponderance of the evidence, or more likely than not.

Moreover, the evidence must be strong enough to withstand some common insurance company defenses, such as contributory negligence. This doctrine shifts blame for the accident from the tortfeasor to the victim. Since many jurors dislike riders, they are usually more likely to believe that something like the rider’s excessive speed, as opposed to the tortfeasor’s failure to look, substantially caused a crash.

Motorcycle crashes usually cause serious injuries. For a free consultation with an experienced Rockford motorcycle accident lawyer, contact Fisk & Monteleone, Ltd. You have a limited amount of time to act.