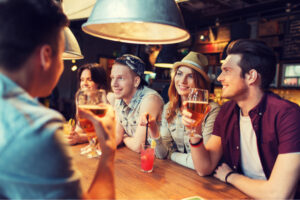 Despite a decades-long “drunk driver” crackdown, alcohol still causes about a third of the fatal car crashes in Illinois. Frequently, a single irresponsible alcohol sale begins a chain of events that leads to a deadly collision. Illinois’ dram shop law, which is one of the broadest dram shop laws in the country, fully recognizes these two basic truths.

Fundamentally, roadway safety is everyone’s responsibility. That includes not only people like motorists and pedestrians, but also entities like restaurants, bars, and private clubs. If any of these people or entities have a chance to prevent a deadly crash, there is a legal and moral duty to do so.

Victims sometimes get lost in the shuffle. A Rockford personal injury attorney is a strong voice in these situations, in court and at the negotiating table. Additionally, attorneys connect victims with the help they need in the wake of a crash. That includes things like vehicle repair or replacement and medical bill payment.

Why is Vicarious Liability Important?

As a result, many Illinois tortfeasors (negligent drivers) are completely uninsured or dangerously underinsured. So, when they cause catastrophic injury crashes, they might not have enough insurance to provide fair compensation for victims.

It’s possible to bring separate actions against individuals, but these actions are risky and complex. Vicarious liability is a much better option. Third-party liability gives these victims an additional source of recovery.

Every state has a slightly different dram shop law (alcohol was once sold by the “dram,” instead of by the glass). The basic elements of Illinois dram shop law are:

In Illinois, items like age and drinking habits, which are necessary elements in many other states, are largely irrelevant.445

Interstate travel is often an issue in these claims. Assume Ted Tortfeasor has a few drinks at a Michigan bar, crosses state lines, and causes a crash in Illinois. Michigan has a much more restrictive dram shop law than Illinois, so it might not apply in this situation. But since the wreck occurred in Illinois and Michigan has a roughly similar law, liability might attach.

Additionally, some dram shop claims have evidence issues. An entry like “cocktail” could be a virgin screwdriver or a nonalcoholic beer. But the burden of proof is only a preponderance of the evidence (more likely than not). Cocktails are more likely than not to contain alcohol.

Rely on an Experienced Attorney

Alcohol providers could be financially responsible for alcohol-related crashes. For a free consultation with an experienced Rockford business lawyer near me, contact Fisk & Monteleone, Ltd. We routinely handle matters in Winnebago County and nearby jurisdictions.