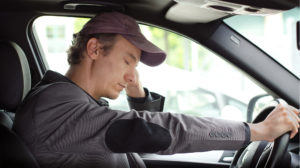 Every year, car crashes seriously injure millions of people. Some form of negligence causes most of these crashes. That negligence could be a lack of ordinary care or a violation of a safety statute, like running a stop light. Most of these crashes also involve one of the five types of driving impairment, per the National Highway Traffic Safety Administration.

Chronic illnesses like diabetes, heart disease and epilepsy often cause sudden and unexpected loss of consciousness, which can lead to extremely dangerous, loss-of-control collisions. In these situations, there is simply no telling where the tortfeasor’s (negligent driver’s) car may travel and who or what it might collide with.

People with adverse medical conditions know they should not drive. In many cases, due to their health conditions, they have safety-suspended licenses. If they drive anyway, they are clearly putting their own convenience ahead of the safety of other people. If there is clear and convincing evidence the tortfeasor acted recklessly in this way, punitive damages may be in order.

Hands-free devices may be even more dangerous than hand-held devices. They are not manually distracting, but they are distracting in other ways. Additionally, they give many motorists a false sense of security.

Even though police and courts have tried for decades to reduce the number of drunk drivers, alcohol still causes about a third of the fatal car crashes in Rockford. After just one drink, alcohol clouds a person’s judgement and inhibits motor skills, making drivers unable to make sound decisions behind the wheel and unable to respond quickly to a changing environment.

Alcohol-related crashes also may involve third party liability. In some cases, grocery stores, bars, and other commercial alcohol providers may be legally responsible for damages.

Alcohol and fatigue affect the brain in roughly the same way. Both cloud judgement, make simple tasks difficult and make multitasking almost impossible. There are some chemical similarities as well. Driving after 18 consecutive awake hours is like driving with a .05 BAC.

The law places alcohol and drug impairment in the same category. In Illinois, it’s illegal to drive under the influence of alcohol or drugs. Impairing substances include:

Impaired drivers often cause serious injuries. For a free consultation with an experienced personal injury lawyer in Rockford, contact Fisk & Monteleone, Ltd. We do not charge upfront legal fees in negligence cases.