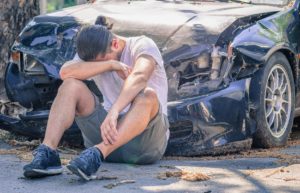 Human error causes over 90 percent of the vehicle collisions in Illinois. This error nearly always involves negligence of some kind. While unsafe driving may be considered a “mistake,” we must all accept the consequences for the mistakes we make. In this realm, these consequences generally involve financial compensation.

Damages usually include money for economic damages, such as lost wages, and noneconomic losses, such as pain and suffering.

Because it increases the risk of a collision and the force in a collision, excessive velocity is a factor in about a third of the fatal car crashes in Illinois.

Speed exponentially increases stopping distance. Simply put, the faster a car travels, the harder it is to control and stop. At 30mph, most passenger vehicles travel about six car lengths before they can stop safely. But at 60mph, stopping distance triples to eighteen car lengths.

Velocity also multiplies the force in a collision. When a vehicle hits a fixed object and stops suddenly, the objects inside the vehicle keep traveling at the same speed. This is why passengers may crash trough windshields or have objects (such as cell phones) slammed into their heads.

Speed and distraction have a lot in common. Just like speed makes it harder to control a vehicle, distraction essentially has the same effect. Hand-held cell phones are the most well-known type of distracted driving, because this activity combines all three categories of inattentive driving:

Hands-free devices may be even more dangerous. They distract drivers in two separate ways. Moreover, they may give motorists a false sense of security. Other types of inattentive driving include eating while driving, talking to passengers, and sightseeing while driving.

Distracted driving is sometimes a little harder to prove. The negligence per se shortcut is often unavailable in these cases.

Since it is a depressant that slows reaction time and impairs judgment, alcohol is also a factor in about a third of the deadly vehicle collisions in Illinois. Alcohol-related fatalities are especially common in mid-sized cities like Rockford. Statistically, people drive more recklessly and there are fewer emergency medical trauma facilities.

Legally, a motorist is intoxicated at a .08 BAC. That translates to three or four drinks for most people. But impairment begins with the first drink. So, alcohol crash liability is much easier to prove in civil court. In fact, consumption alone is usually enough to establish impairment.

Alcohol and fatigue have a lot in common as well. Lack of sleep has almost the exact same effect on the brain as alcohol. In fact, driving after eighteen consecutive awake hours is like driving with a .08 BAC. People who would never dream of drinking and driving have no problem driving home after a long day at the office and a quick dinner.

Car crashes have a number of different causes. For a free consultation with an experienced personal injury lawyer in Rockford, contact Fisk & Monteleone, Ltd. We routinely handle matters in Winnebago County and nearby jurisdictions.