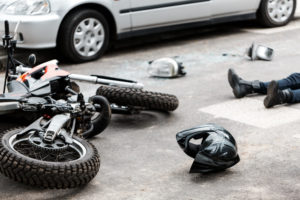 How To Avoid Motorcycle Accidents

Since motorcyclists do not have steel cages or multiple restraint layers to protect them, these victims are almost 30 times more likely to die in crashes than occupants inside four-wheel vehicles. Lack of visibility is a factor in many of these wrecks. However, as outlined below, simply improving one’s visibility might not significantly decrease the chances of crashing.

Wearing bright clothes is one of the best ways for riders to improve their visibility. Furthermore, riders should always have their headlights on, even during the day. However, there is very little evidence that these simple tricks make riding safer.

To improve visibility more, some riders go the extra mile. For example, they weave slightly in their own lanes, which is legal in Illinois. They also make noise, like honking their horns every few blocks or modifying their mufflers and making them louder. Unfortunately, these advanced tricks often further antagonize drivers who do not particularly like motorcyclists to begin with. More on that below.

Fundamentally, the lack of visibility is not the rider’s problem. The tortfeasor (negligent driver) and the tortfeasor’s environment are the two biggest causes.

Most drivers look out for other four-wheel vehicles. They do not watch out for motorcycles or bicycles, whom they usually consider to be intruders in their driving space. Furthermore, large vehicles that are difficult to see around, like SUVs and full-size pickups, dominate Rockford roads. These big vehicles limit driver visibility even further.

So, if a tortfeasor says something like “I never saw you” or “You came out of nowhere” after a wreck, that invisibility is usually not the victim’s fault. Instead, statements like these are essentially admissions of negligence.

Both these theories are subject to insurance company defenses, such as motorcycle prejudice. Although this attitude is not as profound now as it was during the Hell’s Angels days, many jurors believe that motorcycle riders are reckless thugs. As a result, they are quick to adopt an insurance company’s legal defense, even if there is little evidence that supports it.

Unless an attorney defeats the motorcycle prejudice defense, even the best-put-together case might not result in fair compensation.

Lack of visibility, which causes many motorcycle crashes, is usually not the rider’s fault. For a free consultation with an experienced Rockford personal injury lawyer, contact Fisk & Monteleone, Ltd. You have a limited amount of time to act.