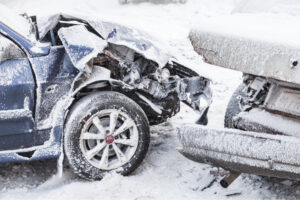 The unpredictable nature of dangerous winter weather increases the number of car accidents in December, January, and February. However, the weather does not “cause” these wrecks. Instead, driver error causes them, at least in most cases. So, it stands to reason that driver caution could prevent these accidents, once again at least in most cases.

During good weather, speed contributes to about a third of the fatal car crashes in Illinois. Limited visibility, slick roads, and other common winter weather conditions increase the potential for a crash and the force in a wreck.

Velocity also increases the force in a collision. Excessive speed transforms a non-injury fender bender into a serious injury collision.

Speed is closely related to following distance. Since winter weather usually increases stopping distance, as outlined above, it’s important for drivers to compensate by increasing their following distance. The additional space gives drivers more time to react to situations that change suddenly.

Large vehicle drivers should increase following distance even more. That goes for large passenger vehicles, like SUVs, as well as large commercial vehicles.

Use Lights and Signals

When visibility is excellent and overall conditions are good, many of us do not signal lane changes and turns. Or, we only activate our signals at the last moment.

State law normally requires drivers to signal about fifty feet, or two house lengths, prior to a lane change or turn. If the weather is bad, it’s usually a good idea to double that distance to one hundred feet. However, do not activate turn signals too early. Other drivers quickly tune them out.

Passenger cars have several headlight-level choices. Most drivers should use all of them when the weather deteriorates.

Amber parking lights, or the outlines of LED headlamps, increase the vehicle’s visibility without creating glare. So, drivers should always use these lights during fog. Visibility often varies significantly in these situations. Fog is usually patchy. On city streets, use low-beam headlights. On rural routes, since it is darker, use high-beam headlights.

Once we get behind the wheel, we are usually in a hurry to reach our destinations. Many people only pull over on long trips when they are dangerously fatigued. Some drivers do not even do that.

Winter weather changes things. Storms often blow out as quickly as they pop up. Pulling over and waiting out a rainstorm or snowstorm is much safer than trying to drive through it. If you have a choice between arriving a few minutes late and taking a chance, always opt for late arrival.

Reach Out to an Understanding Winnebago County Car Accident Attorney

Accident victims are usually entitled to substantial compensation. For a free consultation with an experienced Boone County car accident lawyer, contact Fisk & Monteleone, Ltd. by calling 815-315-0574. You have a limited amount of time to act.