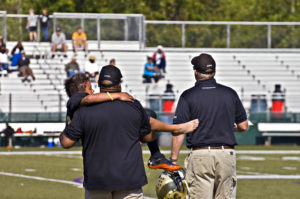 Many school sports team coaches have a win-at-all-costs mentality. Since many coaches are former athletes, the urge to win is deeply ingrained in their minds. Other times, school administrators, players, or even players’ parents place enormous pressure on coaches to win. Winning almost always requires sacrifice, and too many times, player safety ends up being sacrificed.

Young children, even high school-age children, have underdeveloped brains and bodies. So, a serious sports injury often has tremendous ramifications for many years to come. As a result, a Rockford personal injury attorney is usually able to obtain substantial compensation in these cases. That compensation usually includes money for economic losses, such as medical bills, and noneconomic losses such as pain and suffering.

Head injuries affect about 1.7 million people a year, and sports-related concussions are a big part of the problem. Although awareness is growing, the pressure to win often means concussed players go back into the game.

These injuries are difficult to diagnose on the field. Many athletic trainers do not have the proper background. Additionally, many children do not exhibit signature symptoms, like unconsciousness and vomiting. Finally, the brain is very adept at hiding its own injuries. So, many children say they “feel fine” when, in fact, they are seriously injured.

Children often sustain several other physical injuries during practice and games. A rash of common injuries, such as knee injuries, may mean the coaching staff is not conducting practice properly or is not using enough safety protocols.

Assaults are a serious problem before, during, and after practices and games. Many young people have a hard time controlling their emotions and a verbal scuffle may quickly get out of hand. That’s especially true if there are not enough adults around to supervise the athletes.

Legally, the school district, football league, or other governing body is typically responsible for these injuries. The respondeat superior (“let the master answer”) rule applies if the tortfeasor (negligent actor):

Other employer liability theories, which often apply in assault or other intentional tort matters, include negligent hiring and negligent entrustment.

Playing sports is almost always a voluntary activity. But many participants do not fully understand the risk of a head or other serious injury. Additionally, a fight-related injury is almost never a known risk.

School sports injury claims are extremely complex. For a free consultation with an experienced personal injury lawyer in Rockford, contact Fisk & Monteleone, Ltd. We routinely handle matters in Winnebago County and nearby jurisdictions.