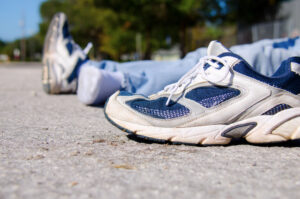 Largely depending on the nature of the accident, hit and run is usually a felony in Illinois. All drivers, whether they were at fault for the accident, have a responsibility to stop at the first safe location, wait for emergency responders to arrive, and render aid if possible. Unfortunately for victims, police officers close fewer than 10 percent of these cases. So, many tortfeasors (negligent drivers) feel like they can get away with hit and run.

Hit and Run in Criminal Court

625 ILCS 5/11-401 requires all motorists to stop and provide certain information to law enforcement officers or other first responders upon demand. If a driver violates either requirement and someone dies as a result of the accident, hit and run is a felony in Illinois. There’s also a mandatory two-year drivers’ license suspension.

Usually, these cases hinge on the driver’s identification. The burden of proof, beyond any reasonable doubt, is very high in these matters. Therefore, unless a credible witness places the defendant behind the wheel at or near the time of the accident, there is probably insufficient evidence to support a conviction.

That witness could be a person or a video surveillance camera. In criminal court, as in civil court, video evidence is usually more reliable than eyewitnesses. Assuming the camera was working properly and someone authenticates the footage, video evidence is never wrong.

Because the standard of proof is so high, unless the driver voluntarily surrenders or there is a mountain of evidence at the scene, investigators usually give up. That’s the main reason so few of these cases are closed, as mentioned above.

Hit and Run in Civil Court

The burden of proof in civil court is a preponderance of the evidence, or more likely than not. That’s a much lower standard of evidence.

So, as a practical matter, if an attorney can identify the vehicle’s owner, that may be enough to obtain compensation. It’s more likely than not that a vehicle’s owner was driving it at a particular time unless the owner has an ironclad alibi.

We mentioned cameras and witnesses above. If a camera or witness only got a glimpse of the driver’s license plate number, that’s probably enough to find the owner. This evidence would probably hold up in civil court even if the witness or camera was several blocks away from the accident scene.

Usually, attorneys partner with private investigators or other such professionals to obtain the additional evidence needed in these matters.

Even if the owner can’t be located, victims might still be able to obtain compensation. An uninsured or underinsured motorist (UM/UIM) policy usually pays compensation in these situations.

Compensation is available for felony hit and run crashes in Illinois. For a free consultation with an experienced Rockford car accident lawyer, contact Fisk & Monteleone, Ltd. Attorneys can connect victims with doctors, even if they have no insurance or money.