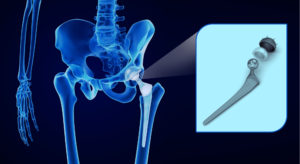 In 2010, professional golfer Tom Watson became the poster boy for hip implants. Mr. Watson underwent hip replacement surgery in 2008, and two years later he nearly won the British Open. Millions of active older adults thought if he could do that, then so could they.

Mr. Watson had one of the new Metal-on-Metal hips surgically implanted into his body. Manufacturers touted these gadgets as long-lasting alternatives to the older Plastic-on-Metal implants. They pointed to the 2010 Open as evidence of this success. But millions of victims soon found out the hard way that this feel-good golf story was the very rare exception to a very different general rule.

Artificial hips first appeared in the 1940s. Despite some significant refinements, today’s artificial hips are a lot like those first ones. Back then, people in their 50s and 60s were not nearly as active as they are today. So, there was little strain on the hip joint.

The hip bone is basically a socket-and-cup joint that allows movement at many different angles. Until the early 21st century, artificial hips had metal sockets and plastic cups. Plastic is obviously not as strong as metal, so these artificial hips usually wore out after a few years. If the person was active, the additional wear and tear accelerated this process.

Inventors thought they had the answer. Make everything out of metal, and the parts would last much longer, perhaps even a lifetime. Artificial hip design changed, but the body did not change. The wear and tear continued. With every step, people with MoM hip implants release microscopic amounts of metal shavings into their bloodstreams. These fragments build up over time, and the more active the person is, the faster the process occurs. Eventually, the fragments cause the implant to dislodge and fail.

Recently, some manufacturers have begun using cheaper metal. The weaker material wears out even more quickly. That often causes device failure in as little as four or five years.

What Happens When They Fail?

With older PoM hip implants, doctors could usually predict when they would need to replace the device. But that’s not the case with MoM implants. So, they often fail without warning. The failure causes excruciating pain and almost complete loss of mobility. Surgery can usually correct the pain, but the loss of mobility may be permanent.

Metallosis (metal poisoning) is a concern as well. The aforementioned metal shavings are just like lead or other metals. If these fragments migrate to vital organs, which is a distinct possibility, metallosis could be fatal.

Due to these serious illnesses and injuries, defective hip implant victims may work with an attorney and obtain substantial compensation. Compensatory damages make up for the economic and noneconomic losses which the victim/plaintiff sustains. Punitive damages punish the negligent company and deter future wrongdoing. Many manufacturers knew about the problems associated with MoM implants, yet they did not take sufficient corrective action.