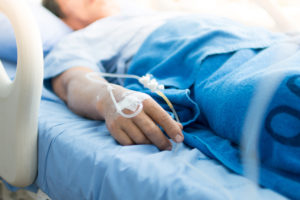 Lack of information is probably the main reason 20 percent of all serious illnesses are misdiagnosed. Most doctors only listen to their patients for a few seconds. Furthermore, rather than ordering many diagnostic tests, many doctors elect to “go with their gut.”

Legally, doctors have a fiduciary duty toward their patients, meaning they must cast everything else aside, such as making money or their own convenience, and only do what is best for their patients. At a minimum, that means a proper diagnosis and solid advice based on that diagnosis.

Accident-related head injuries are particularly difficult to diagnose. Many doctors ascribe early symptoms, such as disorientation, to shock from the car accident or early onset dementia. By the time more advanced symptoms appear – such as headaches and personality changes, these injuries are much more difficult to address.

Brain injuries are permanent. Once brain cells die, for any reason, they do not regenerate. Generally, extended physical therapy is the only effective treatment. Over time, brain injury physical therapists can train uninjured areas of the brain to assume lost functions.

Many physicians assume cancer is always a lifestyle or hereditary disease, therefore, they seldom believe nonsmokers have lung cancer or people without a relevant family history have leukemia.

Cancer survival rates have significantly increased since the 1990s. But the better survival rate usually assumes the disease is diagnosed early. A delayed cancer diagnosis could make the difference between treatable Stage I cancer and more advanced stages.

In terms of misdiagnosis, heart attacks are a lot like brain injuries. Many heart attack victims do not show telltale symptoms. For example, many females do not experience intense chest pains. Additionally, a victim’s first heart attack is often not very serious, therefore, many physicians misdiagnose heart attacks as indigestion or something milder.

As a result, the patient leaves the doctor’s office with a damaged heart and without the tools to repair it. That damage makes a subsequent heart attack much worse.

To many doctors, stroke is an age-related condition. When younger people experience stroke symptoms, many doctors blame something else. That’s especially true if they fail to run the proper diagnostic tests.

However, the symptoms of these two illnesses are basically the same, therefore, many doctors either do not adequately treat patients or prescribe powerful antidepressants, which are not necessary.

Medical misdiagnosis affects thousands of patients. For a free consultation with an experienced personal injury lawyer in Rockford, contact Fisk & Monteleone, Ltd. We do not charge upfront legal fees in personal injury cases.