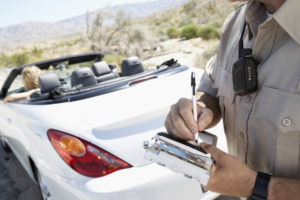 Driver error causes most vehicle collisions in Winnebago County and many of these mistakes involve traffic violations. In these situations, the negligence per se rule usually applies. Tortfeasors (negligent drivers) who violate traffic laws and cause crashes may be responsible for damages as a matter of law.

Excessive velocity causes about a third of the fatal wrecks in Illinois, largely because speed increases the risk of a crash and the force in a crash.

Speeding drivers cannot quickly react. At 30 mph, most vehicles move about six (6) car lengths before a driver can safely stop the vehicle. At 60 mph, stopping distance triples to eighteen (18) car lengths. Velocity also multiplies the force in a collision, according to Newton’s Second Law of Motion, meaning a low speed “fender bender” is a high-speed serious injury collision.

If a driver does not yield the right-of-way, emergency responders almost always give such drivers a ticket. But these motorists are not always legally responsible for the crash.

All drivers have a duty of reasonable care. That duty requires them to maintain a proper lookout for other motorists, whether those motorists obey traffic signals. For example, if Driver A makes a turn at a red light and hits Driver B, Driver B may be legally responsible for the wreck, even though the other driver violated the traffic law.

A variation of this doctrine, which is called the last clear chance rule, also applies in these situations.

This category covers two widely issued traffic tickets: Changing lanes without signaling and making an illegal turn while waiting to turn left against traffic or turning at a traffic control device. Sometimes, victims have little or no warning when drivers make these illegal maneuvers. Other times, it’s clear a driver is going to make a rolling right turn or shift into another lane without signaling. Usually, the tipoff is these drivers were not operating defensively in the first place.

Driving on the Wrong Side of the Road

Some of these violations are technical violations. The driver’s wheels cross the center line for a moment or two. Other times, the driver operates on the wrong side of the road for several seconds or more.

The last clear chance rule often comes up in the latter cases. If a victim sees a driver on the wrong side of the road and has a chance to avoid the crash, the driver has a legal duty to do so. But if the tortfeasor drifted over the center line without warning, it’s almost impossible to avoid a crash.

Generally, police officers issue these tickets if the tortfeasor violated two or more laws at or near the same time (e.g. zipping among different lanes at a high speed). The negligence per se doctrine almost always applies in these cases. Reckless driving is a more severe violation than travelling two or three mph over the speed limit.

Reach Out to Dedicated Attorneys

Tortfeasors who break traffic laws and cause car crashes may be responsible for damages as a matter of law. For a free consultation with an experienced personal injury lawyer in Rockford, contact Fisk & Monteleone, Ltd. We do not charge upfront legal fees in negligence matters.