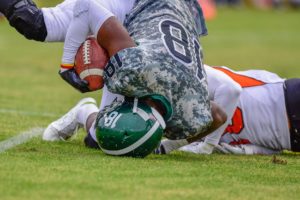 Head injuries are a major concern. Researchers are just now beginning to understand that some sports, such as tackle football, are basically inherently dangerous. It does not matter what equipment the players wear or do not wear. Some form of brain injury is almost inevitable, given the nature of the sport. Other activities, such as soccer, are not much safer. Blows to the head are not as common, but head injury preventative measures are almost nonexistent.

In Illinois, negligence is essentially a lack of ordinary care. Drivers are negligent if they do not drive defensively or obey “the rules of the road.” A similar analysis applies to coaches, trainers, sponsors, and other team officials:

Third party liability often applies in these cases, because of Illinois’ respondeat superior rule. According to this doctrine, an employer is legally responsible for the negligent acts of an employee. So, if a child is injured at a school sports event, the school district is liable for damages.

Short and long-term sports injuries are equally dangerous. For a free consultation with an experienced personal injury lawyer in Rockford, contact Fisk & Monteleone, Ltd. Home and hospital visits are available.