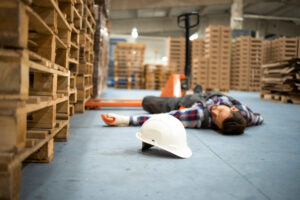 Starting in 1869, it took over 600 workers more than fourteen years to build the Brooklyn Bridge. Today, for a similar-sized project, a construction boss might hire sixty workers and expect the project to be completed in fourteen months. The construction industry is that much more competitive now than it was back in the day. So, worker safety often takes a back seat to profit margins.

This environment fosters a very high accident rate. According to the Occupational Safety and Health Administration, most fatal construction accidents are in the Fatal Four, which are listed below. Even if workers survive these injuries, they miss lots of work and accumulate sky-high medical bills. A Rockford construction accident attorney helps these families obtain the financial benefits they need to carry on.

These injuries, which combine slip-and-falls with falls from a height, are, by far, the most common fatal construction accidents in Illinois. Slip-and-fall victims often sustain severe head injuries. And, a fall from as little as four stories above ground is fatal in most cases.

Construction site falls are also among the easiest injuries to prevent. Perimeter protection and personal fall arrest equipment could prevent many falls. Simple safety inspections, like frequent visual checks of scaffolding and other equipment, could prevent even more of these incidents. But as mentioned above, to bosses who are in a hurry to get the job done, such precautions waste working hours.

These injuries usually involve workers who are caught between a solid structure, like a retaining wall, and a large construction vehicle, like a cement mixer.

Frequently, the workers who operate these machines have little operational experience, especially if they are simply repositioning the vehicle. Furthermore, many pedestrian workers aren’t watching where they are going.

So, in civil court, driver negligence is often hard to prove. But workers’ compensation is no-fault insurance. A Rockford construction accident attorney doesn’t have to prove responsibility for the incident. S/he only has to prove the injury happened at work.

Most workers are well aware of struck-by hazards. There’s an old construction worker saying that a hammer is like a handgun. You shouldn’t take either one off your belt unless you intend to use it. If hammers or other small objects are dropped from a height, they can easily cause fatal injuries to people on the ground.

Many employers are not very diligent about communicating these things to their workers. A boss might make safety equipment available. But the boss might not encourage workers to use the equipment or even explain why it’s important to use it. Employers don’t just have a theoretical duty to keep workers safe. They must take actual steps to ensure actual safety.

Contact with a live wire could cause several injuries. Contact burns are very common. A surge of electricity triggers an involuntary muscle contraction (the “no-let-go” effect). As a result, the victim is exposed to temperatures hotter than the surface of the sun for at least several seconds. Additionally, the arc blast could throw the victim through the air. Finally, electrocutions affect the central nervous system.

Similarly, there are many kinds of construction injuries. We’ve talked about some common trauma injuries. Occupational diseases, such as hearing loss and repetitive stress disorders, are almost as common. Workers’ compensation benefits are available for both kinds of injuries.

Accident victims are usually entitled to substantial compensation. For a free consultation with an experienced construction accident attorney in Rockford, contact Fisk & Monteleone, Ltd. by calling 815-315-0574. We do not charge upfront legal fees in these matters.