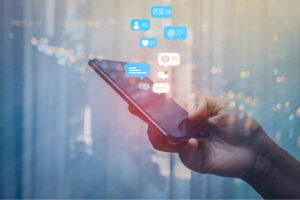 As late as 2005, almost no one used Facebook, Twitter, and other social media accounts. In 2020, more than 50 percent of Americans used social media platforms. Furthermore, they spent almost two and a half hours a day writing and reviewing social media posts. Increasingly, we use these platforms to connect with each other. However, news reports are full of people who hit “like” or “send” without thinking about the possible consequences.

These consequences are especially severe in civil court if you were hurt in an accident. Most personal injury lawyers in Rockford advise victims not to say much in these situations. For example, it’s usually a bad idea to give a statement to the other driver’s insurance company. This advice usually applies to social media posts as well.

Rules About Out of Court Statements

Usually, out-of-court statements, including social media posts, are inadmissible in court. However, the rules in this area are a bit complex, so strap yourselves in.

The hearsay rule usually bars out-of-court statements, if they are offered to prove the truth of the matter asserted. But insurance company lawyers usually admit social media posts to prove that the victim issued the post, not that the post was true.

Assume Victor was hurt in a car crash. Largely out of anger, he tweets that Sally, the other driver, wasn’t watching where she was going. For court purposes, the content is irrelevant. It doesn’t matter if Victor’s assessment is true or not. What matters is that Victor posted this information.

Limited social media posts are okay. If Victor tweeted that he was in an accident and he should be out of the hospital next week, that’s probably all right. As mentioned, most of us use social media to connect with people. Victor’s friends and family understandably want to know that he’s okay, and Victor understandably doesn’t want to call them all individually.

Most insurance company legal teams designate people to surf the internet and look for such social media posts. So, if you post it, they will find it. For the same reason, do not delete adverse social media posts. That could be interpreted as tampering with evidence.

How Social Media Activity Can Hurt Your Case

Some people apologize on social media. In the everyday world, these apologies express sympathy. We often tell our children “I’m sorry” if they had a bad day at school, even though we had nothing to do with the problem, at least in most cases.

But a court of law is different. An apology could be construed as an admission of liability. And, if you posted it, the apology is there in black and white.

Other people vent on social media. For the most part, digital venting is a safe outlet. There’s almost no chance that someone will respond violently. If you vent in person, things could get out of control.

However, such posts often have the appearance of blaming the other driver for the wreck. That could be true, because the wreck could have been entirely the other person’s fault, from a legal perspective. But these angry posts give the wrong message to jurors. Unsympathetic jurors usually do not award maximum compensation.

Finally, if you like other posts or stories about car accidents or other injuries, an insurance company could accuse you of comparing your accident to another one. Once again, this comparison sends the wrong message to jurors.

Reach Out to a Dedicated Winnebago County Attorney

Exercise restraint when you talk to other people about your injuries. For a free consultation with an experienced Rockford personal injury lawyer, contact Fisk & Monteleone, Ltd. Virtual, home, and hospital visits are available.