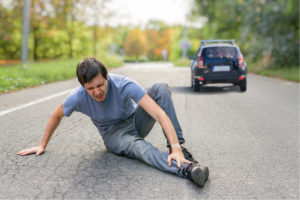 Statistics vary significantly by jurisdictions, but typically, around half of hit-and-run drivers are caught and successfully prosecuted in criminal court.

The percentage may be higher in civil court, mostly because of the lower standard of proof. In criminal court, prosecutors must establish guilt beyond a reasonable doubt, which means a witness must place the defendant behind the wheel – at or near the time of the crash.

But, in civil court, the standard of proof is only a preponderance of the evidence (more likely than not). So, if a Rockford personal injury attorney identifies the car, perhaps by a partial license plate number, that’s usually enough to hold the owner liable for damages.

Whether or not a lawyer, who usually works with an investigator, located the tortfeasor (negligent driver), hit-and-run victims have legal options.

Attorneys and investigators work very hard to locate hit-and-run drivers. Only these hit-and-run claims can go before a jury. Since most jurors do not like hit-and-run drivers, they often award substantial compensation in these cases, especially if the victim sustained a catastrophic injury. Insurance companies know about these juror tendencies, so they often agree to large settlements during pretrial negotiations.

Although they are not police officers, personal injury attorneys can use a number of tools in their search for absentee hit-and-run drivers. Some of these tools include:

Even if only bits and pieces of evidence turn up, a skilled attorney, often when partnering with an accident reconstructionist, can put the pieces together like the parts of a jigsaw puzzle.

Many people think if there is no defendant, there is no case. In many cases, that’s true. But hit-and-run crashes are an exception, at least for the most part.

If the victim does not find the tortfeasor, many victims can file damage claims against their own insurance companies. Companies have a legal duty to settle these claims quickly. They are also motivated to do so. Since the insurance company wants to keep its customers happy, insurance company lawyers are often willing to deal.

If the parties cannot reach an out-of-court settlement, the claim usually goes to arbitration instead of trial. Most insurance policies have obscure clauses which prevent customers from suing their own insurance companies.

Hit-and-run victims have several legal options. For a free consultation with an experienced personal injury lawyer in Rockford, contact Fisk & Monteleone, Ltd. You have a limited amount of time to act.