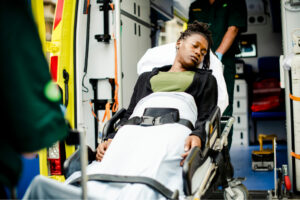 Usually, individuals cannot sue the government, unless the government consents to the act. This doctrine, which dates back to the Middle Ages, is called sovereign immunity. Back then, most people believed that God Himself gave kings the authority to rule. So, they could never make a mistake, and there was no point in suing them. Today, we don’t believe that. So, there are a number of sovereign immunity exceptions in Illinois law.

Most significantly, Illinois has not expressly waived sovereign immunity if one of its employees was negligent. “Negligence” is more than a mistake or an action that hurts someone. Negligence is usually a lack of care. Illinois courts often require proof that the officer acted with conscious disregard of a known risk, or what is called willful and wanton behavior. So, if an auto accident lawyer in Rockford establishes willful and wanton conduct, and can overcome additional defenses, compensation may be available.

Distracted driving causes many of the vehicle collisions in Rockford. That’s especially true of officer-involved collisions. Sometimes officers erroneously believe that if they turn their lights and sirens on, they can blatantly ignore all traffic laws.

Today’s squad cars are more like mobile command centers than motor vehicles. Most officers must continually monitor laptop computers and other devices while they drive. Law enforcement officers, like everyone else, usually cannot multitask in these situations. The duty of care requires ordinary motorists to put away their devices and focus on driving. Police officers are often given more latitude.

Officers responding to distress calls are in a special category. These officers obviously need not obey all rules of the road. But this latitude is not unlimited. For example, many fire departments require drivers to pause at intersections to make sure they are clear, even if their siren is blaring.

The officer’s duty of care sometimes comes into play. If the officer had a passenger, such as a prisoner or a rider, the officer is a common carrier under Illinois law. These individuals have a duty of utmost care. They must take affirmative steps to avoid accidents.

In some cases, willful and wanton could be part of a pattern of conduct. Many law enforcement departments sweep at-fault accidents under the rug. They lightly discipline officers who cause crashes or don’t discipline them at all. So, an attorney must obtain and review the officer’s personnel file. This process is often prolonged and contentious, especially since most officers have served in more than one place.

The city, county, state, or other governmental entity which employed the officer may be financially responsible for damages, under the respondeat superior rule. According to this doctrine, employers are responsible for their employee’s negligence. This may become more difficult since it is usually required that the officer had engaged in conduct beyond negligence.

The employer may not have lability for an officer’s willful and wanton misconduct. This is an area where an attorney’s ability to tie the officer’s conduct to the conduct of his employer may become critical.

There are often additional procedural hurdles in these cases. For example, many victims must file a notice of claim before they file legal action. The notice of claim gives the defendant a chance to investigate the claim and settle it quietly before it goes to court. If the defendant refuses to acknowledge fault or make a fair offer, victims may file legal claims in court.

Contrary to popular myth, you can fight city hall, at least in some cases. For a free consultation with an experienced Rockford auto accident lawyer, contact Fisk & Monteleone, Ltd. You have a limited amount of time to act.