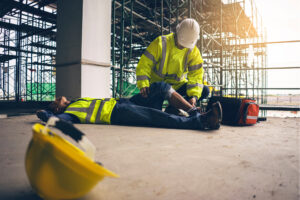 The construction industry accounts for about one-fifth (1/5) of all workplace fatalities in the United States. Some common causes are outlined below. They all have one common denominator: money. The construction industry is so competitive, a few dollars here or there could be the difference between landing a contract or not working. Frequently, construction companies view worker safety as an area to cut corners.

Workers’ compensation is no-fault insurance, meaning injured victims do not have to prove fault or negligence. Therefore, the cause is mostly irrelevant, from a strictly legal standpoint. However, fault on behalf of the employer, which is normally present, makes workers’ compensation claims somewhat easier to resolve.

Generally, either equipment failure or a training failure is at least indirectly responsible for a serious construction accident.

Harnesses, rails, braces, and other safety equipment is readily available. However, as mentioned above, many employers want to save money and they reduce the amount of safety equipment their workers have.

On a related note, some equipment – like rotary saws, includes safety guards and other such devices. However, since they slow down workers, many construction foremen remove them, putting workers at risk.

Lack of instruction could be a problem as well. Illinois, like many other states, features a high number of LEP (Limited English Proficiency) construction workers. For the most part, these individuals are exceptionally good workers, however, their English is limited. LEP workers might not understand usage instructions and how important it is to use certain safety devices. If the general contractor pays for an interpreter, which is not very likely, important details often get lost in translation.

According to the Occupational Health and Safety Administration (OSHA), the Fatal Four cause more than half of all fatal construction accidents in Illinois.

Rely on a Dedicated Attorney

Construction work is one of the most dangerous industries in the United States. For a free consultation with an experienced construction accident lawyer, contact Fisk & Monteleone, Ltd. We do not charge upfront legal fees in these cases.