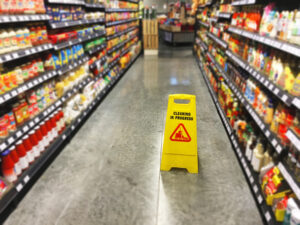 Each year, supermarkets spend more than $450 million to resolve slip and fall claims. These incidents usually cause extremely serious injuries. For example, broken bones often never entirely heal, and head injuries never heal at all. Additionally, even though Illinois lawmakers have clarified certain points of the law, these claims are legally complex.

Because of these two things, these victims need effective Rockford personal injury lawyers to represent them. Only an attorney rigorously evaluates your case and determines a fair compensation amount. Furthermore, only an attorney can effectively present your claim in court, so you never have to settle for less.

As mentioned, Illinois lawmakers have streamlined these claims to an extent. Many states use an antiquated classification system based on common law principles. But in Illinois, there are only legal entrants and illegal entrants.

Let’s examine the second category first. Trespassers include people like home invaders and salespeople who ignore “No Soliciting” signs. Generally, landowners are not responsible for these people’s safety. Tales of injured burglars who successfully sued homeowners are largely urban myths.

Everyone else is a legal entrant. In these situations, landowners usually have a duty of reasonable care. That duty includes making the premises safe and inspecting the premises to ensure continued safety.

Grocery store owners and other retailers are only responsible for injuries if they knew or should have known about the fall hazard. This evidence could be direct or circumstantial.

Direct evidence of actual knowledge could be a restroom cleaning report or a “cleanup on aisle twelve” announcement. Circumstantial evidence of constructive knowledge (should have known), usually revolves around the time-notice doctrine. Either way, victims must establish this element by a preponderance of the evidence (more likely than not).

On a related note, location is an important factor in grocery store falls. Typically, the retailer is responsible for the sidewalk and parking area directly in front of the store. The landlord is usually responsible for safety in common areas.

Assumption of the risk and an open and obvious hazard are the two most common insurance company defenses in grocery store slip and fall claims.

Assumption of the risk usually involves a “Caution: Wet Floor” or other warning sign. Contrary to the popular myth, these signs do not immunize landowners. They simply think that the “assume the risk” defense is easier to prove. The insurance company must still prove the victim saw the sign, could read the sign, and could understand what the sign meant.

Open and obvious hazards include things like banana peels on the floor, aisle displays, and dark-colored liquids. This defense, if it applies, immunizes landowners. But what is open and obvious to some people is nearly invisible to other people, particularly people with vision issues.

Reach Out to an Experienced Attorney

Slip and fall victims could be entitled to substantial compensation. For a free consultation with an experienced Rockford personal injury lawyer, contact Fisk & Monteleone, Ltd. We do not charge upfront legal fees in these matters.