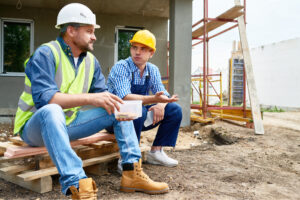 Generally, workers’ compensation insurance does not cover injuries which occur before work, during lunch, during breaks, or after work, even if the injury occurred at the worksite. This exclusion is often good news for victims. Negligence claims are more difficult to prove in court, but if they are successful, victims are entitled to additional compensation.

Because falls are the most common kind of work break injury, this post focuses on slip-and-fall injuries, which occur during non-work hours. Other injuries include anaphylactic reactions to certain foods and injuries related to negligent security (e.g. an assault which takes place in a dark parking lot after work).

To determine level of responsibility, traditional premises liability law divides victims into invitees, licensees, and trespassers. The extent of duty generally determined on the relationship between the owner and victim.

Many states still use this system. But in 1995, Illinois lawmakers replaced this category-based approach with a more straightforward model. A slip-and-fall victim in Rockford is in one of the following two categories:

Procedurally, legal responsibility is a legal question for the judge. The judge typically hears evidence and arguments on this subject during a pretrial hearing. During the trial, the judge tells the jury what standard of care to apply.

Knowledge of the Hazard

Liability for damages attaches if the owner knew or should have known about the hazard which caused the fall. Typically, attorneys partner with private investigators to obtain the needed evidence. Additionally, during the lawsuit’s discovery phase, the insurance company must turn over evidence of knowledge. However, an attorney must know the right questions to ask and the right way to ask them.

Circumstantial evidence of constructive knowledge (should have known) typically revolves around the time-notice rule. Think about a piece of lettuce on a cafeteria floor. If the lettuce was dry and wilted, it had probably been on the floor for some time. In that case, a cafeteria employee should have picked it up. The duty of care includes safety inspections.

On the other hand, if the lettuce was crisp and wet, it probably just fell on the floor. Therefore, constructive knowledge does not attach.

Slip-and-fall victims are often entitled to substantial compensation if the injury occurred during a work break. For a free consultation with an experienced Rockford personal injury lawyer, contact Fisk & Monteleone, Ltd. We do not charge upfront legal fees in these cases.