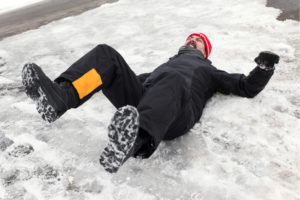 During late winter and early spring, clear ice, or black ice, is very common in Rockford. If the temperature is just above freezing, part of an ice patch melts. As a result, it is even slippier and more difficult to see. That’s especially true if the black ice patch is in the shadows.

Translucent ice is especially dangerous for older individuals as they may have pre-existing conditions, which make them more susceptible to falls or serious injury. Many older people have gait disorders. So, when they slip, they cannot recover their balance. Additionally, many older individuals have osteoporosis or other conditions. Sadly, when they fall, they literally cannot get up.

In 1995, Illinois lawmakers modified the traditional common law classification system to make it easier for jurors to understand. The system in the Prairie State now has only two categories:

Legal Entrant: Nearly all victims have express or implied permission to be on a parking lot at a particular time. Perhaps they are shoppers or children cutting across the parking lot on their way home from school. Because they have permission, the landowner has a duty of reasonable care. This duty requires them to keep the premises reasonably safe.

Illegal Entrant: Legally, people who commit illegal acts while on a parking lot do not have permission to be there. Such people could be car thieves or shoplifters. Because there is no permission, there is basically no duty. Landowners only have a duty to refrain from willful or wanton conduct, like pushing a shoplifter so he/she slips and falls on black ice.

On a related note, physical control might also be an issue. Generally, store owners control the walkway and parking area immediately in front of their stores. The shopping center landlord usually controls most of the parking lot and other common areas. If an attorney names the wrong party in legal documents, the error can be fixed, but there may be a costly delay.

Establishing theoretical responsibility is usually the largest legal issue in a parking lot slip-and-fall case. Victim/plaintiffs must also establish knowledge of the hazard. This knowledge is almost always a fact question, which can be proved by:

In court, victim/plaintiffs must establish facts by a preponderance of the evidence (more likely than not). That’s the standard of proof in civil law.

Either a shopkeeper or shopping center owner is usually liable for injuries due to ice-related falls. For a free consultation with an experienced personal injury lawyer in Rockford, contact Fisk & Monteleone, Ltd. We routinely handle matters in Winnebago County and nearby jurisdictions.